Nathan Sawaya | The Art of the Brick

Nathan Sawaya | The Art of the Brick

Nathan Sawaya | The Art of the Brick | Lego Brick
Nathan Sawaya, a 37-year-old former lawyer has stunned the world with his incredible LEGO artworks.

If giving up a successful career in law that paid a six figure salary, to follow a childhood dream doesn’t spell passion, then I don’t know what does. That’s exactly what Nathan Sawaya did, but he managed to build himself another career brick by brick and now he sells his LEGO masterpieces for thousands of dollars.

Right now, Nathan has an inventory of 1.5 million LEGO bricks to use on his sculptures, at his New York studio and says his largest artwork was made up of about half-a-million bricks. His LEGO works are now as valuable as they are beautiful, selling for more than $10,000 each.

After posting his early work on the internet, Nathan Sawaya started getting orders for his art and realized the huge potential of his work. Now he has even created a piece for Donald Trump. he believes there is nothing he can’t create out of LEGO.

FOR THE FIRST TIME NOW IN AUSTRALIA!

The New York artist’s ‘The Art Of The Brick‘ exhibition has amazed millions of art lovers, both young and old. Nathan’s creations, constructed from hundreds of thousands of standard LEGO bricks, include his iconic ‘Yellow’ piece, the massive ‘T-Rex’ and many, many others. 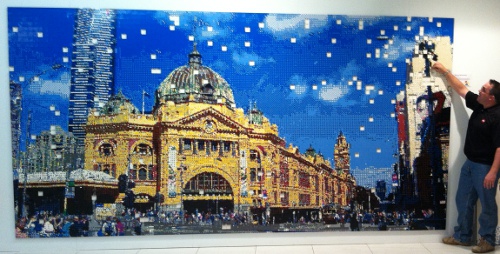 The Art of Negative Space