Painting the streets in São Paulo

Painting the streets in São Paulo

Check out this great project! Buckets of paint are dumped on the street and, with the involuntary help of normal road traffic, create an oversized live painting.

BaixoCentro is a movement of civil occupation that wants to crack, hack and play in the streets, conducted by an open network of producers. The first edition of the Festival happened in 23th march to 1st april, 10 days of a production where artists, producers and audience had the same goal to achieve together: make a whole festival using the interchange of services, infrastructural materials and arts to make it possible. There was more than 100 activities from workshops, performances, street interventions, between others.

The opening was in march 23, 2012, when 200 liters of water solved paint were thrown on one of the main downtown São Paulo avenue: Av São João. The action was made in the morning. By noon, the city council had already washed the painting, even though they were water solved. 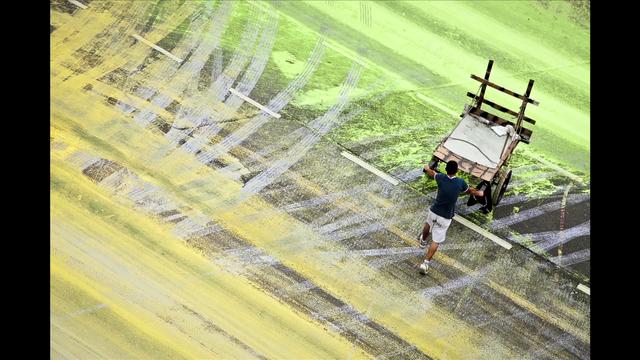 Portrait Made of Dice | DadoRitratti