As in Bruno Serrao’s take on a minimal workspace with plenty of hidden storage, which is something like a desk-sized tacklebox (or jewelry box), the minimalist form of Michael Bambino’s “Tambour” table belies a clever storage solution. Where Serrao’s desk might be suited to OCD-types, Bambino’s version is like something that Dieter Rams would design for a computer geek. 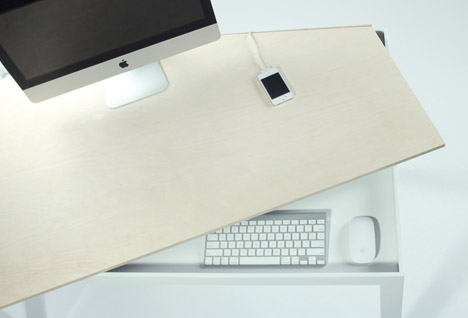 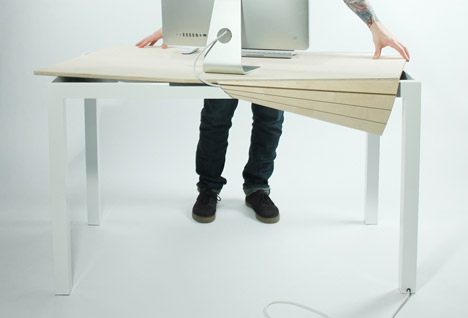 While the “Tambour” table is a cable management system at heart, it’s based on a clever mechanism that allows easy access to a shallow storage area beneath the surface.

The tabletop can be gently pushed away to reveal power, usb connections, and compartments that allow the user to store items or quickly clear the table surface. The tambour of the tabletop allows the table to be placed against a wall. To plug into an outlet or usb the user opens the table, plugs in, and closes the table to find that the wire has been maneuvered into the cutout in the tabletop, keeping all wire clutter protected and out of sight. 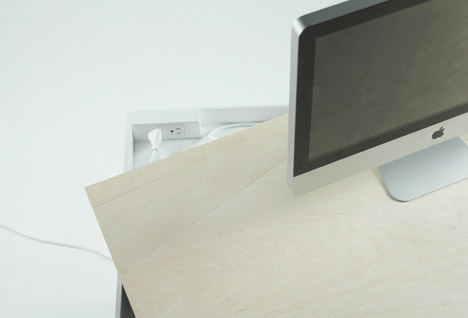 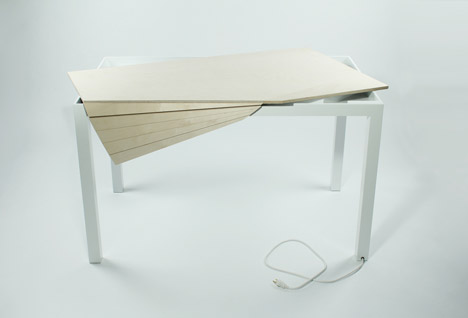 Its name refers to the traditional enclosed writing desks, a sectional rolling-door mechanic that is now more commonly seen drawn (á la blinds) on urban storefronts during non-business hours. The Brooklyn-based enigneer-turned-ID’er has updated the classic design by setting the slats at slight angles—radially from the axis of rotation—such that the fall flush with the back edge of the desk. When the surface is fully rotated, the desk resembles a large box with the lid set off-center, with one corner ‘folded’ down. 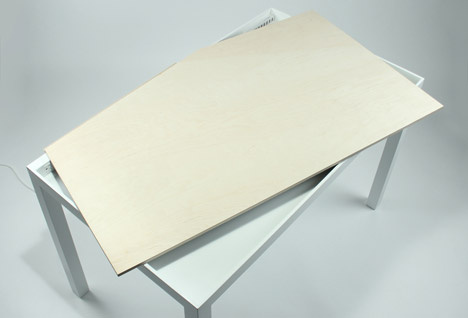 Those are USB charging slots in the top right corner; it’s easier to see them in the video below: